President Lyndon B. Johnson taught us that power reveals

"Power reveals." One week before the US election, Nina Easton wrote this op-ed for the Dallas Morning News on what Lyndon B. Johnson–and his LBJ School of Public Affairs, University of Texas, Austin–teach us about deploying political power to make America a more just and inclusive nation. SellersEaston Media produced the LBJ School's 50th anniversary events and films.

“Hey, hey LBJ! How many kids did you kill today?” That was the mantra of a generation of college protesters. Words that attached human faces to the daily drone of Vietnam casualty counts, nameless kids shipped home maimed or in body bags, while their numbers were recited like sports scores on the evening news. Words that nearly destroyed an ailing Lyndon B. Johnson’s ambition to leave behind a living legacy.

Fifty years ago this fall, the LBJ School of Public Affairs at the University of Texas, the 36th president’s dream to foster future leaders (and, frankly, compete with those elitist Eastern schools), opened its doors to a reluctant generation of college students.

Two-plus years away from a fatal heart attack, his presidency cut short by war, Johnson faced more grim news. “He had just received word that no young people wanted to enroll in his public policy school,” said Ben Barnes, then Texas' lieutenant governor.

“I saw a man broken in spirit,” Barnes recalled of their meeting inside the ex-president’s Austin office. “I saw a man whose face was so full of pain and agony. And I saw a man who was so discouraged and humiliated.”

Vietnam, a failed war that killed 58,220 mostly young Americans, remains a stain on the presidency of Johnson (as well as those of John F. Kennedy and Richard Nixon). But time has a way of deepening history’s perspective, and the passage of a half century has cleared new sight lines on another side of LBJ. He left an extraordinary domestic legacy that shapes America, and American politics, elevating him to hero status among some students today wearing T-shirts with “LBJ’s Laws” running down their backs.

The more than 200 laws LBJ signed during just five years in office, an exhaustive record rivaling that of President Franklin D. Roosevelt, “is the story of how one man in many ways literally remade America,” said presidential historian Michael Beschloss. That remake is especially relevant as we approach a critical presidential election.

‍
In 2020, America is 25 years away from becoming a country where whites are a minority, a demographic truth that drives our widespread embrace of diversity, which has in turn provoked a backlash. The reason behind America’s changing face: The 1965 Immigration and Nationality Act, passed when LBJ declared the U.S. bias against nonwhite immigrants “un-American.”

George Floyd’s killing earlier this year propelled a civil rights movement with broad public support into a racial justice movement with broad public support, both rooted in the spirit of a law that LBJ signed just eight months after taking office. “The only time I saw Martin Luther King cry,” former UN Ambassador Andrew Young recalled of that July 2, 1964, signing ceremony for the Civil Rights Act. “Tears just dripped down his cheek.”

The 1965 Voting Rights Act followed, enshrining into law “the fundamental rights of every citizen to ask for what they need, and to fight for what they deserve,” the words of one of the LBJ School’s more famous alumni, Stacey Abrams. After a deadly pandemic reshaped how we cast our ballots, that “fundamental right” has been threatened by sources well beyond the Southern segregationists originally targeted by that law.

The Affordable Care Act, likely to go before the Supreme Court in November, extends what LBJ started with a bipartisan coalition that enacted Medicare, deploying the federal government to ensure health coverage to more than 44 million seniors today. Another 72 million low-income Americans, nearly 20% of the population, are covered by Medicaid.

LBJ broadened access to a quality education for the nation’s school children, while college grants and scholarship programs helped push the portion of Americans with college degrees from 8% to more than 30% today. And in the coming decade, as massive private-public missions are pushing humanity farther and deeper into space, it’s well worth recalling that LBJ was a major force behind the rise of NASA and the first moon landing.

Even casual students of American history are familiar with LBJ’s war on poverty legislation, including Head Start and food stamps. But how many know that the Washington metro system, public broadcasting, the National Endowment for the Arts, clean water and air laws, and even Sesame Street were part of the LBJ record?

At a time of name-calling and polarization, it’s worth recalling that even during another politically divided period, bipartisan coalitions, led by stubbornly visionary leaders, came together for reforms for American society. The Civil Rights Act was passed by the U.S. Senate because 27 Republicans stood alongside LBJ as he faced down racist Southern Democrats. The same coalition held for the Voting Rights Act, and the Immigration Act passed with 74% of Democrats and 85% of Republicans in Congress.

While most Americans tend to be (rightly) suspicious of big government, some massive national problems can only be tackled with massive national action. A global pandemic comes to mind. LBJ reminds us of what Washington power can achieve.

“The great importance of Lyndon Johnson’s legacy is that he believed in the use of government to advance the national well-being,” says presidential historian Robert Dallek.

Finally, there is a pointed lesson in the LBJ story about seeking and finding the true inner core of any politician asking for our vote. LBJ was often a brute; his rise to power was not a pretty sight. But as LBJ biographer Robert Caro, a tough critic of his subject, has said: “Power reveals.”

When Johnson finally attained real power, as Senate majority leader in 1955, what did he do? Caro reminds us: He passed the first civil rights legislation since Reconstruction.

It took Barnes' plan of state-funded scholarships in the early 1970s to persuade the first classes of students to apply to the LBJ School. Today, said Abrams, alumni treat their experience as an obligation to fulfill LBJ’s legacy.

“It says something,” she said. “It says that you have a commitment to civil rights and social justice, that you believe that policy has to follow idea, and that action requires you to push forward even in the face of challenge.”

At a time when voters have retreated to their corners, when Americans can’t even agree on facts, when social politics infuse everything from scientific analysis to wearing masks, LBJ’s complicated but transformative legacy offers a simple truth as a starting point for unity.

“Johnson,” said Dallek, “saw America as a place where anyone could succeed.”

Nina Easton, co-chief executive of SellersEaston Media, produced the short film “Democracy’s Destiny,” from which these interviews are drawn, as part of the LBJ School’s 50th anniversary celebration.

From The Dallas Morning News 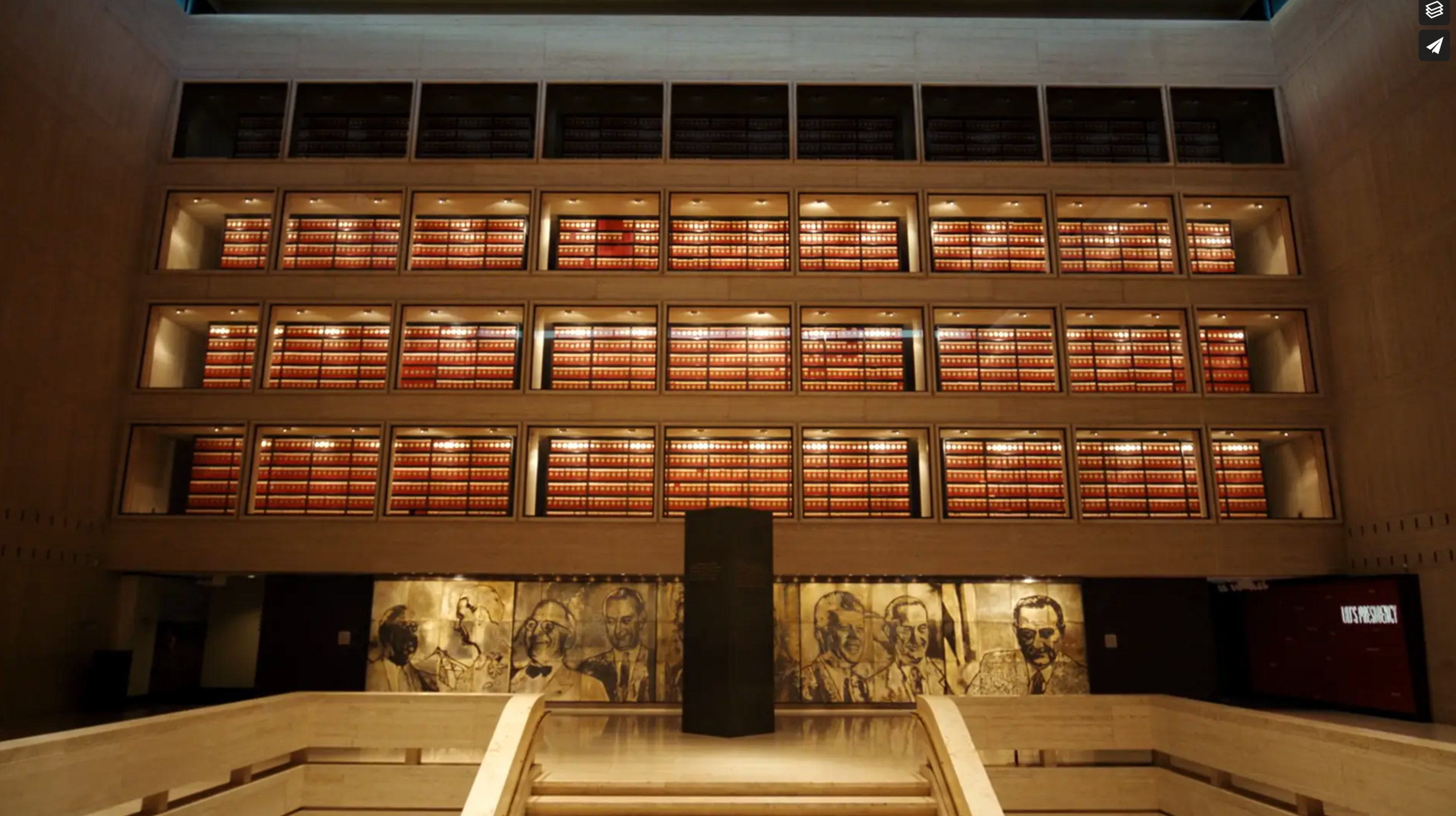 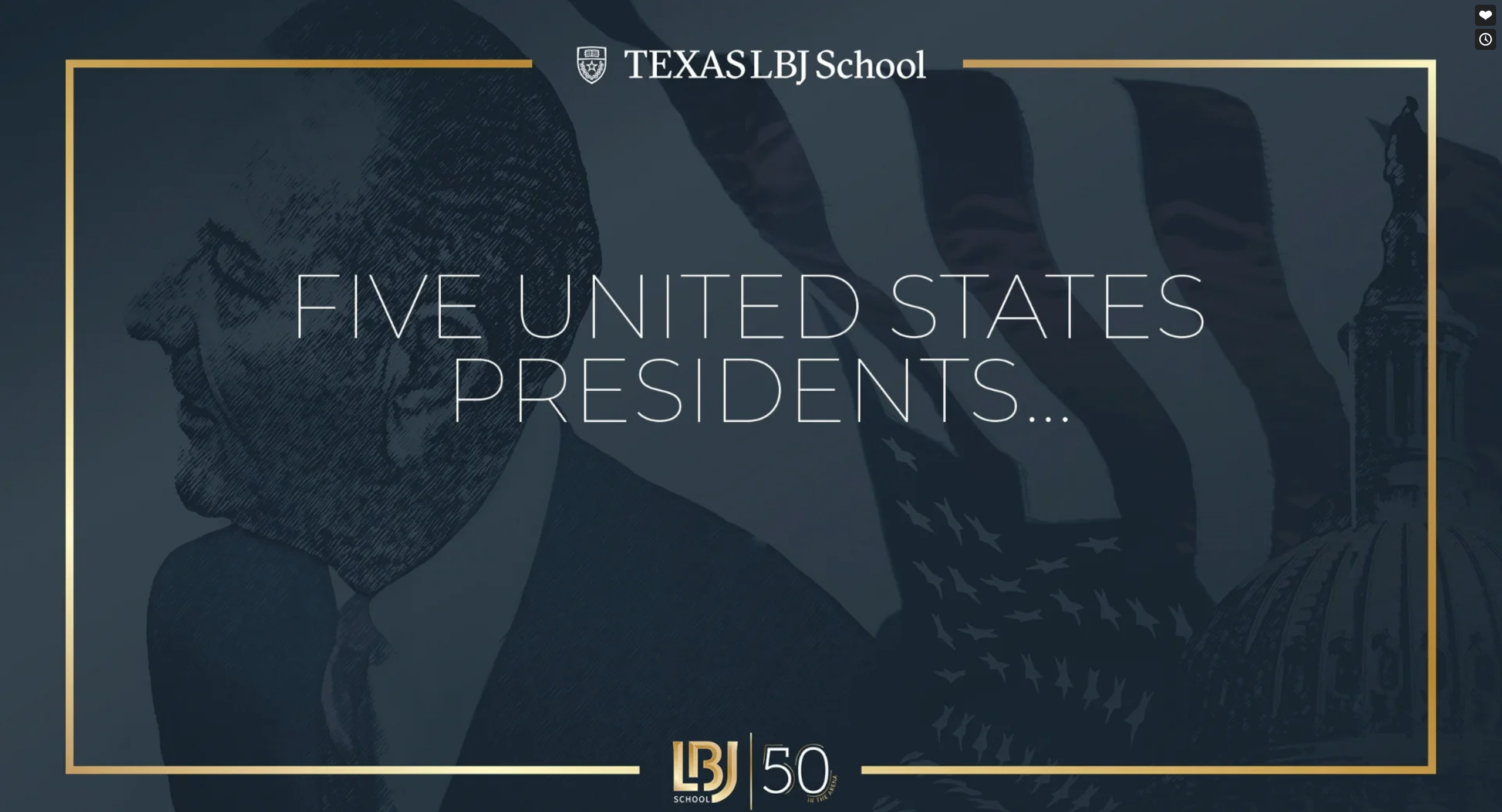 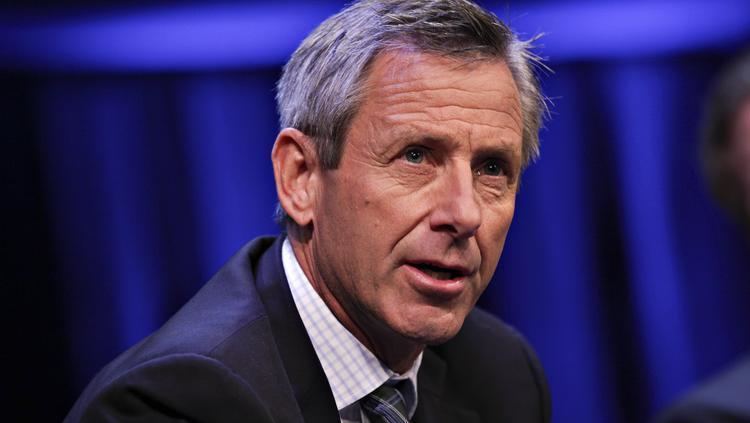 The Art of Leading from Home